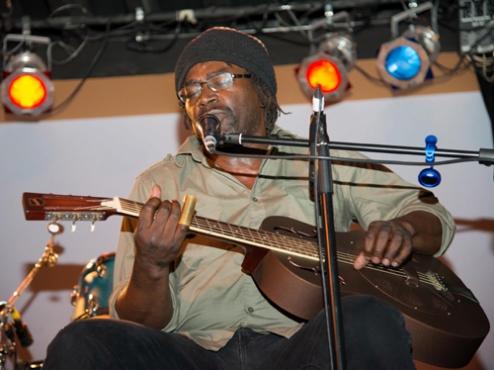 Talk about bringing down the house before he plays so much as a lick: Red Bank-based blues/ reggae specialist (and bats-left guitarist) GARY WRIGHT has had to postpone his first full-length gig in several seasons this Friday night — scheduled for the historic Woman’s Club as the latest in a series of Reckless Steamy Nights — due to falling ceilings and other not-uncommon maladies benighting the life of a dedicated bluesman.  (photo by Terri GO Seminoles Walliczek)

It was no less an old bluesman than John Lennon who said, “the blues is a chair, not a design for a chair or a better chair…it is a chair for sitting on, not for looking at. You sit on that music.”

Of course, when the person in the chair is someone with the skills and savvy of Gary Wright, that functional piece of furniture can be a throne of kings. The Red Bank-based singer and guitarist (who, just to clear things up, is not this Gary Wright) shares a love and a passion for the blues with a great many other veteran performers on the Shore soundscape — but in the hands of this southpaw stringbender, the legacy of the earliest blues recording artists comes alive. You hear the wise cat’s instinctive sizing up of the room and the audience; the troubador’s sense of social justice, and the crossroads at which the scholar’s pure research transmutes into joyous poetry.

Talking to the native of Syosset, Long Island, you also get to meet the supreme baseball fan — the kind who recalls every detail of a childhood trip to see the infamous 1962 Mets play the Mays-McCovey-Marichal era Giants at the old Polo Grounds. The kind who can rhapsodize for hours on the awesome 1970s era of Pete Rose, Reggie Jackson, Thurman Munson. The kind who actually got the opportunity to try out for the Yankees in 1984, as a lefthanded-hitting outfielder.

Boss Steinbrenner’s loss was ultimately the regional music scene’s gain, as Wright — a Red Banker for the past 28 years — would become known as co-fronter (with ex-wife Jennifer Wright on vocals) of Terraplane Blues, a band that released two CDs, played several major blues festivals, opened for some pretty legendary acts, and even made it to the finals of the 2000 International Blues Challenge in Memphis.

In the years since the Terraplane was permanently garaged, Wright has gigged extensively with reggae unit Predator Dub Assassins; sat in with his friend Chuck Lambert; produced the forthcoming CD by Richie Havens Band veteran Poppa John “Bug”; taken part in multi-artist benefits (such as a recent event in Asbury Park organized by the nonprofit Musicians on a Mission), and even showed up at the odd house party sort of affair — including, in the interest of full disclosure, a 2011 happening that took place at this correspondent’s digs inside the Stephen Crane House.

This Friday night, November 30, Gary Wright becomes the latest guest performer to join in the Shore’s longest-running house party — the Jersey Shore Jazz and Blues Foundation’s monthly series of Reckless Steamy Nights at the Woman’s Club of Red Bank. If you’ve yet to attend one of these unique and intimate events inside the historic Anthony Reckless estate on Broad Street, you owe it to yourself to take in some fine and fascinating sounds, take a tour of the landmark house, and take a break for conversation and refreshment with likeminded music fans. UpperWETside went looking for Mr. Wright, in advance of what promises to be his first (and, hopefully, far from his last) full-band solo showcase.

END_OF_DOCUMENT_TOKEN_TO_BE_REPLACED 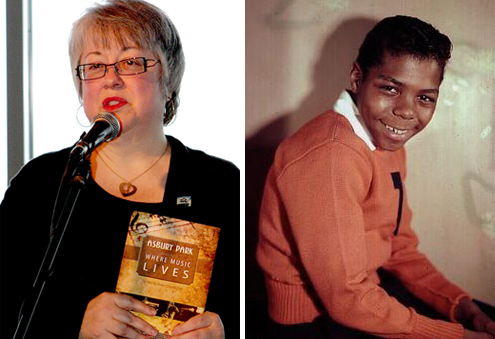 Do Teens Change Music? For that matter, Why Do Fools Fall in Love? WHERE MUSIC LIVES author Helen Pike seeks the answers, and she’ll be invoking the spirit of juvie chart-topper (turned junkie rock-bottomer) Frankie Lymon to find out.

It is well nigh impossible to keep up with Helen-Chantal Pike.

We mean that in the sense that it’s always difficult to stay current with the collected works of the prolific local historian, author, raconteuse and rocky-ological digger of diverse sounds. We also mean that if you have a notion of, say, joining her in a drink and a bit of catch-up conversation, well, you have to keep up to catch up. Like, literally chase after her as she fireballs forward to your appointed destination, with or without you.

The editor of the recently published anthology of essays known as Asbury Park: Where Music Lives has had a busy bunch of months, even by Helenic standards — with much of that activity centered around the city’s hosting of the Smithsonian’s touring New Harmonies exhibit and its attendant year-long slate of interrelated music-themed events.

That aforementioned anthology — a whirlwind carousel ride past some little-known corners of Asbury musical history; written in many instances by the very people who gave those scenes their soundtracks — was the “guest of honor” at a July 10 “Book Jam” event on the stage of Asbury Blues; an evening that featured such pieces of the Asbury musical mosaic as Sonny Kenn, Xol Azul Band frontman “Gee” Guillen, folk singer/ folklorist George Wirth, saxman Dorian Parreott (performing a piece written in Asbury for Fats Waller), gospel singer Tyron McAllister, opera/ cabaret vocalist Brett Colby, and Patsy Siciliano (performing an original song about the city penned by doo wop specialist Ray Dahrouge).

If you’ve reckoned that Pike’s peaked as regards the promotion of that book (her tenth in toto and her third on the city in particular), then reckon again: she’ll be on the scene for Sand Blast Weekend; signing copies of her Asbury-centric titles on Friday, July 22 between the hours of 4 to 7pm at the Asbury Galleria inside Convention Hall’s Grand Arcade. Then on Tuesday, July 26 she’ll be taking over the historic Stephen Crane House — yeah, the same hallowed haunt where the author of this blog makes his home these days — for the first of three “Music Memoir” events that culminate with an “Unplugged” words ‘n music birthday party on August 9.

Of course, absolutely none of this even begins to address the question “Do Teens Change Music?” — or precisely what any of it has to do with Frankie Lymon. That’s another story entirely, natch — about which more after the break.