The life and luminous legacy of the late JOE HARVARD — one-of-a-kid maker of music, savior of “trash,” and bringer of positive radiation — is celebrated with a new trash-art installation (and a special black-light opening reception) at Asbury Park’s art629 Gallery. (Joe photo by Kristen Driscoll)

In Asbury Park — a place where a few too many landmark structures have met the wrecking ball — lovers of the local landscape can attest that the loss of a favorite haunt or hang can feel like losing a longtime friend. On the flipside of that thought are the people whose passing feels like the removal of a beloved building or public space; a loss that gets one pondering how that missing puzzle-piece could have continued to contribute to local life, or served to inspire those who will come to stake out their own experiences and visions for this city.

Joseph Incagnoli Jr. — better known as Joe Harvard — was just such a figure on the scene; one whose madcap energy (and seemingly undimmable enthusiasm in the midst of often monumental adversity) served to embody the very scrap and spirit of a certain little city by the sea. A genuine legend in his native East Boston (where he co-founded Fort Apache recording studios, and had a hand in the creation of some significant records by The Pixies, Radiohead, Hole, and many others), Joe would find his way to a raggedy-but-re-emerging Asbury Park around the turn of the new millennium — and, before his death from cancer in the early spring of this year, would tickle the fancies and touch the lives of people from all all corners of town.

A songwriter, guitarist, sound collagist, event promoter, painter, published author, community volunteer, cool dad, and actual ivy-league Harvard Man, Joe was furthermore a master raconteur and storyteller-slam champion — although the stories he told were anything but tall tales, as witness the outlandish but entirely true story of how this guy very nearly became a member of the ruling family of Pakistan. Regardless of how you might have made his acquaintance — as the gadget-laden “One Banned Man” busker on the boardwalk; as ringmaster of a series of “Long Weekend” open mics at venues around town; as a softball teammate; as a worker with local kids or homeless adults; as a rescuer of animals; as a member of combos with names like Dub Proof, the Cockwalkers, or the Velvet Underground tribute “Velveeta;” as an advocate for diversity, inclusivity and acceptance in this weirdly welcoming city — Joe was somehow many Joes, seemingly existing everywhere at once.

That said, Joe Harvard left his biggest impression with the widest cross-section of humanity, via the signature endeavor known as The gARTen — “the world’s first all-trash, open-air, walk-through, black-light, glow-in-the-dark art gallery,” and a project via which Joe (ably abetted by partner Mallory Massara and other gleefully hoodwinked volunteers) collected, curated, and created a vividly colorful something from “invisible” plastic nothing; transforming a drably vacant patch of downtown business-district real estate (between Parlor Gallery and Cookman Creamery) into a sur-real estate that served as zany Zen contemplation garden by day, and luminous destination attraction by night.

Puttering like a farmer in his fertile fields of reclaimed household detritus and rebirthed containers of laundry detergent, Joe played host to a passing parade that featured curious passersby, musical performers, and his longtime friend, underground rock/ folk icon Jonathan Richman. And it was a philosophical Joe who would be charged with the task of breaking down the gARTen (and a short lived sister location on the west side of town) at the end of 2018, shortly before receiving a Stage 4 cancer diagnosis. For the irrepressible creative spirit, those last months were ultimately another chapter in a decades-long campaign to seize life and passion and compassion and curiosity and good cheer, from the same devils that tend to trip up so many of us less alive souls.

When he passed away at the age of 60, Joe left behind none of the standard signifiers of celebrity or material “success” in a fast-transitioning Jersey shorescape — but he left a deliriously rich legacy all the same, and on Saturday, November 2, the genius of Joe Harvard radiates once more for all to see, when Patrick Schiavino’s art629 Gallery hosts an opening reception for Glow For Joe, a retrospective celebration of the late artist’s life and luminous work. 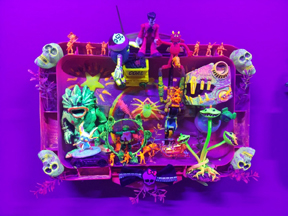 More than 60 of those black light sculptures are scheduled to be on display for this weekend’s opening event, which will be “done in complete darkness, with only the sculptures illuminated by black light.” While the public got an advance look at many of the pieces during the recent Asbury Underground festival, the work is of course best experienced by the glow of the lighting which has been specially installed for the occasion — an occasion, by the way, during which several of Joe’s musical collaborators and friends will be performing live.

In addition to the artwork offered for display and sale, copies of Joe’s book The Velvet Underground and Nico will be available for purchase at the opening reception. A best-selling entry in the popular 33 1/3 series that explored landmark record albums, the 2004 volume on the influential band’s 1967 debut has seen publication in Japanese, Chinese, Spanish, and Portuguese editions. All proceeds from sales will be dedicated to a fund being established in Joe’s name, with goals that include the dedication of a memorial plaque in Joe’s honor, assisting Mallory Massara with lingering medical bills, and (in conjunction with Brookdale Community College) a scholarship for a local student.

All are welcome at Saturday’s Glow For Joe reception, running between 7 and 10 pm inside the gallery space at 629 Cookman Avenue in Asbury Park — and the artwork will remain on display through November and December. Visit art629.com for further details, including seasonal gallery hours and information on viewing appointments.