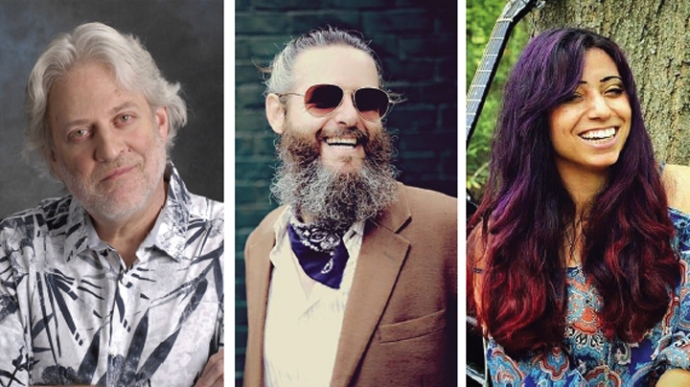 L-R: Dean Friedman, James Dalton, and Nikki Briar Shore up their local base of support, in three separate events going on Friday, March 29.

He stood out from the pack of earnest 1970s singer-songwriter types by staking a sonic streetcorner all his own; a place where it was perfectly permissible to name-check fast food franchises, New Jersey shopping malls, New York television stations, and such august institutions as the Saddle River Little League. His wryly  good-humored takes on contemporary life would occasionally land Dean Friedman in the midst of controversy — and that same sense of humor has always served as a “critical survival tool” to the Paramus native whose lone foray into the US Top 40 (“Ariel”) was a reference-packed romance that turned a chance meeting with a peasant-bloused, vegetarian Jewish girl (“I said Hi/ She said  Yeah, I guess I am”) at Paramus Park into the retro-catchiest pop song of 1977.

“I always had an affinity for those kind of details,” observes the composer whose descriptions of dates with the titular Ariel included onion rings at Dairy Queen, a band gig at the American Legion hall, Annette Funicello movies on TV, and a fundraiser for radio station WBAI. “They help to conjure up that time and place.”

Having performed occasionally in Asbury Park since those days — beginning with a  high profile 1977 opening set for Southside Johnny and the Jukes — Friedman makes an encore appearance at McLoone’s Supper Club this Friday night, March 29, with a set of “story songs” drawn from a 40 year recording career. Scheduled for 8 pm, the show that finds Friedman performing solo on guitar and keyboards is described as  “a deep dive” into a catalog that spans eight studio albums and more than 300 released tunes; an “atypical set list” about which the songsmith says “I figured it’s stime to give some of those overlooked songs a chance to shine…but no worries, I’ll always play the fan favorites.”

Those favorites include the previously banned ‘n branded “McDonald’s Girl” (known also in a popular cover by the Barenaked Ladies, as well as a version by The Blenders that went to Number One in Norway), plus “Lydia,” “Lucky Stars,” ”I Didn’t Mean to Make You Cry” (a surprise hit in Greece) — and “A Baker’s Tale,” the answer song to a chart-topping British hit by Half Man Half Biscuit entitled “The Bastard Son of Dean Friedman.”

As for that fanbase, it’s curiously enough been concentrated almost from the get-go in the UK, a place where “I’ve always enjoyed a higher media profile versus the United States” — and where Friedman will be returning in April for a months-long major spring/summer tour of Ireland, England, Scotland and Northern Ireland that concludes in August with a multi-day encore appearance at the annual Edinburgh Fringe Festival. In fact, Friday’s gig in Asbury Park is one of only two scheduled dates on US soil (the other is in the singer’s current hometown of Peekskill, NY) for the performer whose witty, sophisticated and often site-specific compositions have been embraced by listeners “throughout the English speaking markets…New Zealand, South Africa, Eastern Europe, South America, and Guyana.”

“Both of my kids live in LA,” explains the multi-tasking artist who’s remained rooted on the eats coast. “

In addition to that aforementioned BBC-ban kerfuffle, Friedman found himself at the center of a “Cannabis Controversy” during a recent UK jaunt, when the tour sponsor Goldenseeds announced that they’d be distributing packets of cannabis seeds to the first ten purchasers of CDs at each concert — a situation that caused the artist to pledge not to distribute the seeds within 50 yards of the concert venues.

Particularly exciting for Friedman in the summer months ahead are two weekend-long editions of SongFest, the “micro-music festival” for which the American visitor serves as producer, curator and host — and which boasts the participation of Squeeze co-frontman Chris Difford (who, after canceling a solo appearance at Asbury Lanes recently, will be hitting the Stone Pony SummerStage with the reunited Squeeze this August).

It was a 2002 visit to Edinburgh Fringe that proved an eye-opener for the Garden State guy whose 1978 sophomore LP Well, Well Said the Rocking Chair (one whose small-label sensibilities fell victim stateside to the “music industry politics” of major label distribution) represented his breakthrough in old Blighty.

“I always had some kind of comedy in all of my albums,” explains the songwriter who declares himself a fan of 1950s-60s era satirical singer Tom Lehrer (as well as the “similarly influenced” Randy Newman). “I saw all of these brilliant comedians pushing the envelope at the Fringe fest, and it made a big impression on me” — an impression that manifested itself in Friedman’s first “all-comedy song album,”  the 2006 collection Squirrels in the Attic. Go to the singer’s website to find examples of that “wry, satirical wit” on display in topical tunes like the W-era scandal song “I Miss Monica,” and the more-timely-than-ever climate change country-honker “A Terrible Pickle.”

It’s all a part of a multi-media journey that’s seen the author of The Songwriter’s Handbook finding success as a composer of soundtrack music for films and TV (Eerie Indiana, Nick Arcade), a purveyor of “silly kids songs” (and “silly Hebrew School songs”), a creator of the photo comic strip Earl the Squirrel, a conductor of workshops and masterclasses, and a designer of video games — a diverse portfolio of projects for which “there’s always a musical component…I love all kinds of music myself, and at the end of the day I have a strong affinity for really good songs.”

“My audience is a listening audience,” Friedman observes — and as for the Shore area audience that’s received multiple visits from the avowed “Jersey boy,” the artist praises his “knowledgeable crowd…we share a similiar ethos, and I have a real fondness for that crowd, and the town. It’s nice to see it coming back.” 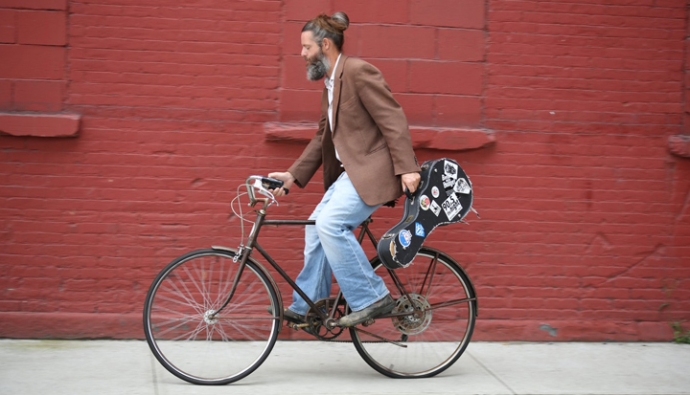 SOUNDS: James Dalton and Friends, at Monmouth U

It’s a “songwriters in the round” style concert — and a Monmouth debut for James Dalton, the self-proclaimed “story- teller guy, song man, front man, radio personality, poet, and actor” whose presence on the Garden State’s soundscape ex- tends from his co-founding of the enduring jam band Secret Sound, to countless appearances in solo, duo and small combo settings at popular area nightspots. Hosted inside the Pollak Theatre on Friday night, the 8 pm program also serves as a homecoming of sorts, for the vocalist-guitarist-harpist who penned and performed the exuberant anthem “Come Back to the Jersey Shore.”

It’s a renewed commitment for the artist who has described himself as “of the scene, but not part of it” — a troubador whose globetrotting escapades could just as easily have found him jamming in a Shanghai jazz club until 3 am, or entertain-ing on a series of Baltic Sea cruises, as keeping the home resburning in the saloons of New Brunswick or Asbury Park.

Having taken on the additional role of single dad to a three-year old son, the Ocean County native now keeps his professional travels beyond New Jersey to the neighboring states of Pennsylvania, New York, and Connecticut — but while he doesn’t play to audiences in Florida or Vermont like he did in seasons past, the multi-tasking music man has instead expanded the reach and range of his creative energies, via the recent release of a spoken word album project, and his ongoing stint as host of a weekly radio program on listener-supported 90.5 The Night.

Along the way, Dalton has had the pleasure and privilege of working and sharing stages with partners that have ranged from beyond-legendary session drummer Bernard Purdie, to next-generation talents James McMurtry and Derek Trucks, to such Jersey-pride performers as Nicole Atkins, Vini Lopez, and Bon Jovi’s David Bryan. For his debut event on the Monmouth campus, the author of several collections of poetry — and creator of the autobiographical Shanghai to Memphis, a solo theatrical piece that he brought to the world-famous Edinburgh Fringe Festival — presides over an affair about which he says, “I’m not the star of the show in the least.”

Joining the host for “a more collaborative, in-the-round experience” is a collection of “very interesting people” that includes Linda Ronstadt’s musically gifted nephew Michael Ronstadt, Dublin-bred singer-songwriter Steve Reilly, as well as fellow Shore favorites Steve Delopolous, Tara Dente, and Karlee Bloom. Adding more colors to the sonic palette are Point Pleasant Beach’s April Centrone (an educator and expert in Middle Eastern music with a specialty in the stringed instrument known as the oud), and Andy Keenan (on banjo and pedal steel).

“These are people that I’m either a fan of, or I’ve toured with in the past,” says Dalton. “There are no musical strangers to me.”

Star turn or not, at the heart of this Songs and Stories solar system is Dalton, a constantly searching artist whose command of his own skills shines brightly, whether flying strictly solo or fronting the band Sleepy James and the Up All Nights. On highly personal, localized songs like “Jersey Shore,” “Grafton Street” and “The House My Grandfather Built” — or on universally resonant material like “Sugar Mama” and “Everyman’s Blues” — the musician blasts away the stereotype of the mellow creature with the acoustic guitar; playing with the full intensity of a multi-piece combo, and lending his incredible vocal range to “hillbilly werewolf” whoops, cool-cat scats, and illuminating choral fills that do the job of three or more backup singers.

“I Grew up on Frank Sinatra/ Southside Johnny and the Asbury Jukes/ Say something bad about them, best be puttin’ up your dukes!”  …so sings Nikki Briar in “Jersey Girl,” the crowd-pleasing contempo-country anthem off her 2013 album Dancing in the Headlights. Coming to you straight outta Nashville (by way of Garwood, NJ), the homegrown favorite of East Coast country/rock audiences name checks Bruce, Bon Jovi, and the Stone Pony (where she’s delivered her upbeat bootstomping originals to a Shore core of fans) in the signature song that she’s also shared in opening sets for superstar acts like Tim McGraw.

When the “proud army wife” (who appeared last year in a support-the-troops concert at The Headliner in Neptune) returns to Asbury Park on March 29, she’ll be settin’ ‘em up and knockin’ ‘em down at Asbury Lanes, in a Friday night fricasee that further features Butch Ralph. Doors open at 7 pm, with tickets ($8) advanceable at asburylanes.com.