Like those famous swallows returning in springtime to the belltowers of Capistrano, the seaside landmarks of Asbury Park play host to a similar spectacle in the fall — similar, that is, if you substitute undead hordes of zombies; lumbering and lurching by the thousands onto the herringboned hardwoods of the famous boardwalk, and summoned to this place at the edge of a chilly autumnal sea, by an all-consuming hunger for “BRAINS!”

Returning rain-or-shine to the city’s beachfront and boulevards this Saturday, October 6, the Asbury Park Zombie Walk occupies a special space on the social calendar. Born as a grass-roots “underground” phenomenon — one that’s since been approved by the city government and embraced by the Chamber of Commerce — the event represents a somewhat melancholy marker between the end of the extended Local Summer season, and the Hallo/Holiday interlude beyond. Artier/edgier (and stage-bloodier) than your typical small-town Halloween Parade — yet still entirely family-friendly — the Walk remains at heart “a really fun, cheap way to kick off the Halloween season,” in the words of Jason Meehan.

A photographer by profession when he and his then-wife Christina made their home in Asbury Park back in 2008, Meehan was a monster maven and horror fan who professed to being “insanely jealous” when he learned of a massively successful Zombie Walk that took place in Atlanta — an event that drew thousands of fans from all over the map, to a living and (yes) breathing homage to those hungry-for-brains creatures who’ve been affectionately dubbed the “working stiffs” of the monster kingdom. Energized by the realization that literally anybody could become a perfectly passable zombie, the Meehans announced their first-ever Zombie Walk in 2008, armed with little more than a stack of flyers and the “viral marketing” tool that is MySpace.

The decision to use Asbury Park as the host venue was a no-brainer, so to speak — the city that had been given up for real dead not so many years prior had “the architecture and the ambience,” as well as a surplus of (soon to be demolished) structures that spoke to the once-bustling resort’s bleakest times at the tail end of the previous century. While the event organizers didn’t count on much more than a handful of family and friends, that first Walk exceeded expectations with some 400 to 500 participants — and when the follow-up 2009 event drew an estimated 1,500 members of the walking dead, the man who would be Zombie King had the not-at-all crazy notion to go for the Guinness.

Rebranded as the New Jersey Zombie Walk, that 2010 event made history — a clicker-confirmed, independently audited and certified Guinness World Record for the largest such gathering of costumed zombies anywhere on the planet: 4,093; a number that could easily have swelled past 5,000 had the 40-degree temperature of that late October’s day not spooked away many of the more scantily-clad participants in the already cold-blooded collective. When a Pennsylvania-based event snatched away the mantle the following year, the Asbury walk answered back in epic fashion, with a 2013 gathering that clocked a positively jaw-dropping 9,582 costumed marchers.

(According to Meehan, it’s a figure that’s since been trumped, when a trio of Midwest-based events joined forces for a World War Z mega-assault on the record books. That said, the 2013 rotting-flesh rendezvous on the Asbury boards can still be considered the gold standard for zombie walks centered around a single locale and organizer) 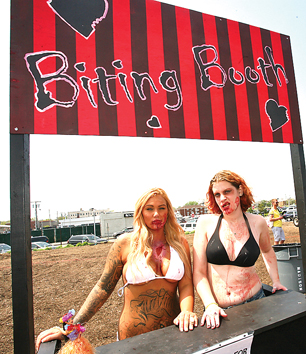 In between, the NJ Zombie Walk expanded its parameters, with a weekend-long 2011 Undead Festival that featured film screenings, live musical numbers (from local casts of Little Shop of Horrors and Sweeney Todd), cast members from The Walking Dead TV series; a panel of cast and crew from George A. Romero’s original Night of the Living Dead (a midnight-movie phenomenon, by the way, which was distributed back in the day by the Asbury-established Walter Reade Organization) — and even a legally binding zombie wedding, officiated by then-Mayor Ed Johnson.

Those record-smashing runs — events which, curiously enough, were credited with resurrecting interest in Asbury Park as a host site for entertainment events — would go on to earn Jason Meehan a coveted Carousel Award from the Chamber of Commerce in 2014. By that time, however, the ZomKing was beginning to rethink his approach to a volume-obsessed endeavor whose “hurry-up-and-wait aspect really killed everybody’s buzz…by the time we started our walk, most of the people didn’t want to do it.”

“We asked people what it is they liked most about the event…and at the core of it, it’s the walk,” explains Meehan over his decision to put down the click-counter. “We’re happy with having set the record twice…but these days it’s more about quality over quantity; about making sure everyone has a good time instead of just focusing on the numbers.”

A relocation from the Asbury Park area, a new marriage, a new family, and a new career in the craft brewing industry inspired Meehan to take a few zombie-steps back from his once-obsessive pursuit — and a new partnership with downtown Asbury watering spot Johnny Mac’s House of Spirits allowed him to keep his hand in, with the October happening that recently returned to its original branding as the Asbury Park Zombie Walk.

“The Johnny Mac people have been great, particularly Christine (wife of tavernkeep John McGillion), who’s helped us secure the permits and get the logistics together,” says Meehan. “The Chamber helps us coordinate things with Madison Marquette on the boardwalk, the city has been really helpful, and we have a good system going on.”

Saturday’s “Festerin’ Festivities” begin at 10 am, when souvenir/merch and information tables open to the public inside the Grand Arcade of Convention Hall. Within the main hall, a “Pro Makeup Artist Alley” offers participants several different levels of applied zombie-hood right on up to the Walk start time of 4 pm — while for the duration of the pre-Walk hours, a Bloodmobile from Central Jersey Blood Bank will be parked outside the Paramount Theatre, accepting donations (with no registration necessary) “so that the undead can give blood before it all coagulates!”

The Paramount is also the scene at 2 pm, when Asbury’s own Dark City Brewing Company and nearby Kim Marie’s Eat and Drink Away team up to present the eagerly awaited Jell-O Brain Eating Contest, with three competitive categories (Ladies, Gents and Kids) offering cash prizes to the winners. Creatively costumed zombies are urged to be on the boardwalk at 3 pm, when a team of roving judges will award “finalist” stickers to select contestants, allowing them to vie for cash-prize honors (as much as $200 for first prize winners) in the categories of Best Adult, Best Child, Best Couple, and Best Group.

Then at 4 pm, the main event lurches into gear, as the official Zombie Walk commences southward from Convention Hall to the Casino and Carousel; heading west on Cookman Avenue and finishing up in front of Johnny Mac’s (208 Main Street), where the best-in-show costumes will be announced at the event stage. The downtown business blocks will also be the setting for another returning favorite feature: the Zombie Dance Team salute to Michael Jackson’s “Thriller;” a staple of the Zombie Walk since Year Two.

“We don’t charge anyone for just showing up and taking part,” adds Meehan. “So people can check out the businesses on the boardwalk and downtown; patronize the restaurants, and really experience the city, so that they’ll come back year round.”

Long after the last undead entity has lurched to the finish line, the music and mirth continues through the evening, with the event’s official after-party hosted at Johnny Mac’s from 9 pm — and with other local landmarks getting ghoulishly into the act, including the Wonder Bar (where Sandy Mack and special guests hold court in a Night of the Living Dead jam; see the music listings page in this week’s Coaster), and the AP Yacht Club (where Matt Wade appears with his Zombie Band). Craft beer aficionados should keep an eye out for the very limited edition Zombie Walk pumpkin beer; a “biscuity amber ale…lightly spiced with cinnamon, vanilla, nutmeg and allspice”  that’s been brewed exclusively for this weekend’s event by Dark City, in partnership with Meehan and Matt Whelan.

While the Walk in its present form has proven to be “a very manageably sized event the past three years,” the founder allows that “ we’d like to build it back up again,” alluding to discussions about possibly incorporating a scavenger hunt as part of the day’s activities in the near future.

“Other events have faded, but there’s still room to grow here,” adds Meehan. “I think that the authenticity and the unique atmosphere of Asbury Park just makes this a perfect fit.”

“I don’t know how long the zombie fad will keep going…but as for the Asbury Park walk, it’s got a lot of life to it!”

Check asburyparkzombiewalk.com (as well as the event’s social media pages) for updated info on this year’s cadaverous gathering — and keep yourself above ground for next week, when we look at the latest in a long line of AP UNDERGROUND music and art happenings.