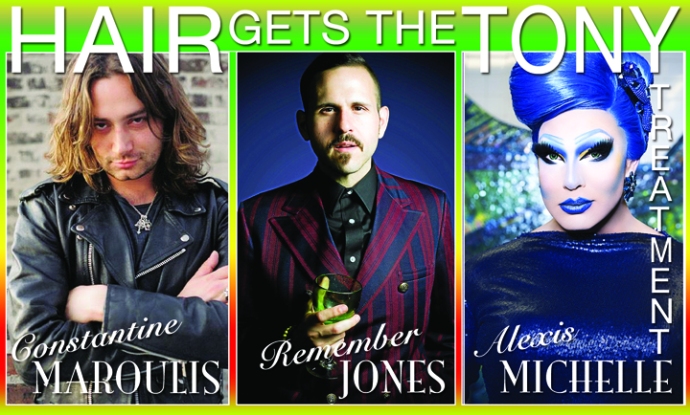 The scene, beneath a darkening evening sky a couple of Mondays back, might have qualified as something akin to “magic,” to anyone who keeps tabs on the Asbury Park music whirl. Magic, or maybe more accurately the stuff of superheroics — the kind in which a mild/wild-mannered actor/ singer/ director named Anthony D’Amato suits up as dynamic alter ego Remember Jones; summoning his big-band organization like a jukebox Justice League, and taking to the stage, any stage (in this case, a “surprise surprise” open-air freebie at Asbury’s Springwood Park), whenever the energy level threatens to flag.

The unannounced entry in the AP Music Foundation’s Music Mondays series was made all the more remarkable by the fact that D’Amato/Jones and company were supposedly just homeward bound from one of their most extensive multi-state tours to date — giving these assembled Avengers the apparent superpower of being in multiple places at the same time. It’s a not-at-all outlandish assumption for longtime observers of Remember Jones (the man and the band), given that the act has exploded so as to seem everywhere at once — touring and recording behind an ever-growing catalog of supremely soulful original music; astonishing audiences with themed sets dedicated to everyone from Amy Winehouse, Joe Cocker and Jeff Buckley, to Kanye West (and even a full concert experience drawn from R. Kelly’s “Trapped in the Closet”); and just generally supercharging the show-band template in venues that have ranged from the smallest of spaces to the Stoney SummerStage.

“Really, I’m not a superman,” insists D’Amato, who in his “spare time” has starred as both Jekyll & Hyde in a recent production at Axelrod Performing Arts Center in Deal Park, portrayed Hedwig and Rocky Horror’s Frank N. Furter, and consulted as a producing artistic director with the Strand Theater in Lakewood. “I have anxieties…I lose my voice…and I’ve failed at things!”

That said, the succinctly self-described “entertainer” acknowledges that the Remember Jones project is “the fastest-moving thing I’ve ever been part of; it feels like the first time I’ve caught some fire, and it’s turned into something big…and something that’s a business…really fast.”

In the process of bolstering the act’s nationwide profile — and getting into position to become the honest-to-goodness Next Big Thing nurtured by the fertile Jersey Shore music scene — D’Amato continues to brainstorm ways in which to bridge the twin realms of theater and pop music. Attentive attendees at that Springwood set might have picked up a crucial clue to the showman/shaman’s next move, when the Remember Jones band launched into a stormcloud-defying chorus of “Let the Sun Shine In,” a timeline-defining signature selection from the groundbreaking Rado-Ragni-McDermott rock musical Hair. Not coincidentally, the show that marked the golden anniversary of its Broadway debut here in 2018 comes to the Axelrod PAC stage for five performances beginning Wednesday, August 15, in a concert-format production co-produced, directed by and co-starring the ubiquitous Mr. Jones.

“The show has been a big part of my life,” explains D’Amato in what could only be considered a classic understatement — since, in addition to being called upon to direct stagings of Hair three times (including a stand at Red Bank’s Count Basie Theatre through Phoenix Productions), the theater veteran has worked extensively with original Hair producer Michael Butler — as well as with the show’s co-creator James Rado, with whom he’s looked in on numerous productions around the country; working with various casts (or “tribes”), and making significant contributions to Let the Sun Shine In, a 2007 documentary on the show’s history and lasting legacy.

For the collaboration with APAC producer Andrew De Prisco, D’Amato has taken a spin through “people from all walks of my life;” calling on old friends and new favorites alike from the often intersecting worlds of Broadway, classic rock, and TV-driven pop culture. It’s a dream-cast scenario highlighted by the participation of Jersey native, American Idol finalist, and two-time Tony nominee (for Rock of Ages and Spring Awakening) Constantine Maroulis.

“I’ve known Constantine for years; we grew up together in the theater, and he’s done guest shots in Remember Jones projects,” says D’Amato of the actor-rocker who takes on the role of Berger — and who appeared as Judas in a Jesus Christ Superstar production from Asbury-based Premier Theatre Company, for which the future Jones served as music director.

Until very recently, the Axelrod production boasted an additional Tony connection in Mary Bridget Davies, the nominee (for the title role in A Night with Janis Joplin) who regretfully bowed out of the role of Sheila, due to a pregnancy-related health issue. Stepping in at the APAC is Shira Elias (pictured), an actress and singer whose credits span several Asbury Park projects for the now-defunct ReVision Theatre Company, and a career as co-frontwoman of Turkuaz, the funk band that wowed crowds at the most recent Bonnaroo festival.

Another interesting high-profile addition is Alexis Michelle, who D’Amato took notice of as a finalist on RuPaul’s Drag Race (the director remains “a big fan” of the show) — and who was considered for one of the Broadway revival casts. The ten-piece Remember Jones Band accompanies the cast of nineteen performers — among them several of the lineup’s backing vocalists — with Remember Jones himself taking on the principal role of Claude.

“This is a theatrical experience…and a music experience as well,” says the director of the project that’s already sold out three of its performances. “The meat of it is the songs (a score that famously includes “Aquarius,” “Good Morning Starshine,” and the title theme)…I’m having an interesting time cutting some of the sequences, to focus on the music…and it’s maybe the first time ever that this music has been played by a band with this kind of rock background.”

“The guys and gals I work with are trusting me with this one…they know that I present all kinds of ideas and crazy plans,” D’Amato says of the concert-style show (and yeah, that means that everybody keeps their clothes on this time). “We’ve got a great relationship with the Axelrod people, and we’re bringing a community together here.”

The performances of Hair scheduled for 8 pm on August 15 and 16, and at 3 pm on Sunday, August 19, have sold out — but tickets ($37-$45) are available for a special 10 pm late show on Saturday, August 18 and a just-added 8 pm on August 19, with reservations at axelrodartscenter.com. All shows are accompanied by a display of historical materials from The Hair Archives, and an extra multi-media level of authenticity is lent by Marc Rubinstein’s “Pig Light Show,” the real-time projection designs that famously graced 1960s-era venues like Bill Graham’s Fillmore East.