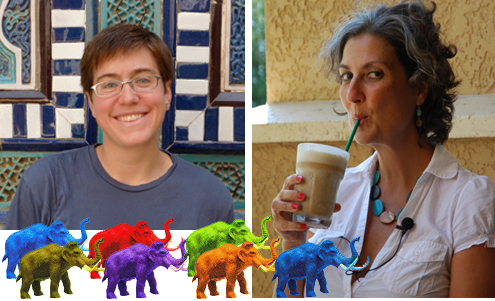 We’d tweet you the title, but we’d probably go over the character limit.

An original comedy by Madeleine George — a college professor and writing teacher whose resume includes some of the  best-known universities and correctional facilities in the state of New York — the show called Seven Homeless Mammoths Wander New England is pitched as an “academic sex comedy;” one that’s being recommended for mature audiences on the basis of “simulated sex between prehistoric college students and contemporary lesbians.” You know, for those who are a still a tad flinty about where Pebbles and Bamm Bamms come from.

In the production (going up inside the Two River building’s “black box” Marion Huber Theater space) under the direction of Obie winner Ken Rus Schmoll, a small-college administrator named Dean Wreen (Mercedes Herrero) must contend with the budget-axe amputation of the struggling school’s Natural History museum — at the same that her ex-girlfriend Greer (Deirdre Madigan) re-appears to further complicate things with the Dean’s much younger current partner, Andromeda (Flor De Liz Perez).

Throw in a campus Caretaker (Joel Van Liew) who apparently lives in the basement — and a come-to-life couple of Early Man exhibits (Lauren Culpepper, Jon Hoche) who “take us through the history of human relationships, without moving a muscle” — and you’ve got what Dias has championed as a play that “weaves together screwball comedy and academic satire with a truly profound view of contemporary relationships, and the different ways that people make a family.”

A draft of the playwright’s script for SHMWNE (pronounced Sham Wow?) was performed as a reading at Two River Theater earlier this year, a crucial first step in the company’s renewed commitment to making Red Bank a destination for new and original stage works. Dias, who’s made good on his promise to bring “a couple” of world premiere shows to local audiences — the other is In This House, opening in March 2012 — sat down with upperWETside to talk about what we can expect to see when the Mammoths lumber into town (spoiler alert: it’s NOT a stage full of trained elephants)…

upperWETside: Well, congratulations on your first world premiere project at Two River Theater — but I’ve got to ask you about that title, which doesn’t exactly pack the punch of ART, or RENT. I’m not even sure there’s a marquee in the land that’s big enough to accommodate it.

JOHN DIAS: Yes, but on the other hand a title like that could definitely get the audience’s attention. I’m sure a lot of people will be intrigued by that name, to the point of having to find out more about it. Around here, we’ve settled into a shorthand version of the title — we just call it ‘MAMMOTHS.’

So is this an appreciably different version of the script that was read at Two River Theater last spring?

Absolutely. It’s a whole new cast; a new director, and Madeleine has spent many hours working on the play in the months since then. She’s been able to come here and see it take shape; work with the actors — it’s helped her to see things differently from how it may have originally been envisioned.

One of the things that I’ve found interesting about the Marion Huber space is that there’s a different seating configuration every time…there have been shows done sort of in the round; head-on with bleacher seats, and they even did one called THE GHOST’S BARGAIN, which was set up almost like a basketball game…

For this play, and for the other world premiere later in the season, we’re setting up the audience in a way that will get the most out of the space. The room is a rectangle, and we’re dividing it on a diagonal, so that there are two triangles— the stage area in one triangle, and the audience in the other. So it plays on the intimacy of the piece, and at the same time the set is quite wide.

What kind of staging are we talking about here? Is it a single set, a Dean’s office with the bookshelves and all the details, or a more representational approach?

The action moves around, so it’s not done as a really detail intensive set. There are a number of settings in the play — there’s the Dean’s house, the inside of the Natural History museum, and down in the basement of the school, where the caretaker lives.

Something I couldn’t help noticing this season was that there seem to be a lot more preview performances scheduled for each show, prior to the official Opening Night. With MAMMOTHS, you’re running for two weeks, at least a dozen performances, before you let me into the building for the Press Opening on the 29th. And the Shakespeare show had a solid week or more of previews, up from the four or five that Two River used to do.

That’s something that we were meaning to try out, at least with a couple of the shows, as a way to work out the kinks — especially with the two new premieres on our schedule. It’s a way to give the artists more opportunity to learn the show, to learn what the play is.

From my experience, doing Shakespeare is quite a complicated endeavor — with Much Ado About Nothing, having those additional previews was much appreciated by the artists involved. When you’re doing Shakespeare, you need to be in a conversation with the audience — you fall in love with the play because of what it is, but you don’t quite KNOW what it is until you bring the audience in.

Another thing that I’ve noticed is that you’ve got some overlap on your schedule; your new play NO CHILD goes up in the main auditorium on November 1st, while MAMMOTHS continues for two more weeks at the other end of the theater…

Right. Our thinking here is that this building, the Two River Theater, has two really extraordinary spaces within it, and a great lobby area between, where we’ve had our BeforePlay events and our receptions. We wanted to schedule things in a way so that we’d have two different audiences here at the same time for two different shows, and that these audiences would mix with each other — talk about the shows they came to see, compare notes — both before the performances and hopefully again at the end.

Or, if they’re anything like me at the multiplex, slip into one of the other pictures. Could this literal chat-room approach also be construed as part of the play’s development process? Is the play in a constant process of evolution right on up to Opening Night?

I would say that a play doesn’t stop evolving until the CLOSING night!

Seven Homeless Mammoths Wander New England begins an extended run of previews on Saturday, October 15; presents its official Press Opening on Saturday, October 29, and runs a schedule of evening and matinee performances, Wednesdays through Sundays until November 13. Seating for all shows is limited (with many of the earlier performances SOLD OUT as we post this), and tickets are $37 – $67, with a new discounted price of $24 for anyone 30 years and younger. Reserve by calling the TRTC Box Office at 732.345.1400, or visiting the TRTC website for schedule details and availability — as well as info on dinner/show packages and other special-event performances.

One thought on “‘MAMMOTHS’ to a Happy Home, at TRTC”