The late James Avati, pictured in the early 1990s at his Broad Street studio, employed friends, family members and Red Bank neighbors as models for his sought-after paperback cover paintings of the 1950s, 60s and 70s.  (Avati photo by Piet Schreuders)

He was the King of the Paperback Book Cover Artists — even the Rembrandt of the Paperbacks, according to some. An innovator who set the pace during what’s widely considered a golden age of American illustration — and he did it all from his walk-up studio above Broad Street in Red Bank.

During the years dating from the end of the Second World War to the era of the WIN Button, the late James Avati created hundreds of vivid, powerful cover paintings for novels by Faulkner, Dreiser, O’Hara and many other leading literary lions of the day — as well as for upstarts like J. D. Salinger and Mickey Spillane, whose hardboiled epics were reportedly no favorites of the artist.

Famous for reading every word of every book he was hired to do, Avati was commissioned for dozens of high-profile titles from New American Library and other top publishing houses, and found his smoldering, moody style quickly imitated by his peers. It would have been easy for him to work exclusively with the best available models, but what truly set Avati’s work apart — what gave it that edge of authenticity and heart — was his preference for “real people” subjects; many of them drawn from his circle of friends, relatives and neighbors in and around Red Bank.

Beginning this Friday evening, July 15, those faces that once called out to readers from drugstore bookracks and bus station spinners will be on full-size display, as the Monmouth Museum on the Lincroft campus of Brookdale College hosts an opening reception for The Painting World of James Avati. A sampling from the world’s largest collection of the artist’s sought-after work, it’s a priceless portrait of American realism in words and pictures; a painted diorama of a bygone Red Bank, and a fascinating glimpse into the creative process of a man whose signature work has been described as “the darker side of Norman Rockwell.” 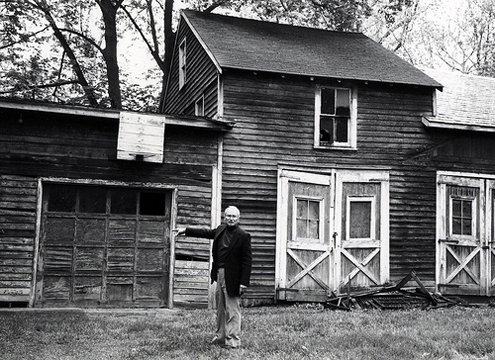 James Avati returned to the Little Silver milieu of his early years, in this 1999 photo by European collector Piet Schreuders.

Encompassing some 60 oil paintings — all of them work-for-hire projects commissioned for published paperbacks — the exhibit is drawn from a collection of more than 300 Avati originals that were painstakingly acquired and assembled by the artist with his friend, agent and fellow illustrator, the late Fair Haven resident Stanley Meltzoff.

“My father lived every minute of every day as an artist — but he wasn’t a businessman,” says Sally Avati, one of three children from James Avati’s second marriage, and the conservator of the paintings in the Avati estate.

“Stanley was the brains of the operation, as far as collecting and preserving the original paintings…in the 1980s, he would tell my father ‘Jim, you’re starting to get famous; you could make some money off that old stuff’.”

When James Avati died in 2005 at the Petaluma, CA home of his son Tim, the collection of oil paintings on Masonite made its way to a barn on the Meltzoff property — and, after the passing of Stanley Meltzoff’s widow, to the Red Bank home of Sally Avati, who supervised the cleaning of the originals (many of which had moldered away in warehouses for decades) and had a number of them newly framed for the Monmouth Museum retrospective.

As an Avati family member, young Sally was occasionally called to action as a cover model — as was her older half-sister Alexandra “Zan” Avati, who frequently represented female protagonists of these often edgy literary works. A convert to the Mormon faith and a resident of Maine, “Zan” is, according to Sally, “not crazy about a lot of the things she posed for back then…some of them were kind of provocative.”

While nowhere near as lurid as a lot of what was designed to catch the eye of curious browsers back in the day, Avati’s images kept one foot planted in the once-reviled traditions of the “pulps” and the dimestore potboilers — adding an element of the greatest 20th century American realist painters that spoke to the artist’s genuine appreciation of the best homegrown writing. That, plus Avati’s obvious mastery of his craft, would win him a lot of friends and admirers in his lifetime (particularly the Dutch collector, designer and documentarian Piet Schreuders), while many of his contemporaries would remain mired in obscurity.

Avati friend and neighbor Gerry Wyndorf is pictured at left with four of his real-life kids in a detail from the cover design for THE MAN WHO LOVED CHILDREN (woman in the foreground is another Red Bank neighbor, Betty Harrison); at right, Jan Wyndorf did duty as Jessamyn West’s CRESS DELAHANTY for a late 1960s reissue.

Another factor that’s kept the Avati legacy alive and kicking is the fact that so many of those cover subjects are around today to discuss their experiences — including lifelong Red Banker Carrie Wyndorf,  who at the age of seven found herself (along with her father Gerry and siblings Robin, Peter and Betsy) the recipient of a rare “house call” from the artist who normally preferred to set up his tableaux inside the controlled environment of his downtown studio.

“A tree fell down in our back yard, and Mr. Avati thought it would make a good setting for what he had in mind for his latest book,” says Carrie in reference to the 1968 reissue of Christina Stead’s 1940 novel The Man Who Loved Children — a minor cult item about a large, colorful and very dysfunctional family.

An avid shutterbug and a veteran employee of the old Dorn’s Photo Shop, the late Gerry Wyndorf was nothing like the raving patriarch of the Australian author’s book — but he did have a seemingly inexhaustible supply of kids to press into service, and that in itself was reason enough for Avati to trek from his Washington Street home over to his friend’s place on Throckmorton for his customary series of photographic studies. The finished cover painting — a good example of the late 1960s trend toward figures silhouetted against white or stylized backgrounds — would incorporate a foreground image of the fictional clan’s eldest daughter, portrayed here by another Avati family friend, Betty Harrison.

“He was the cutest old guy — he reminded me of Wally Cox,” says Carrie of Avati, who would also paint another of her seven siblings — older sister Jan Wyndorf — for a reprinting of Jessamyn West’s 1940s coming-of-age classic Cress Delahanty. “He was also quite the ladies’ man, his whole life.”

A shared interest in photography helped forge a friendship between the elder Wyndorf and Avati — and the Wyndorf offspring have remained lifelong friends with Sally Avati, who has also curated a selection of her father’s carefully catalogued reference photos for the exhibit; a set of images that convey “the different stages of how he came to produce a finished painting.”

There’s no charge for admission to Friday’s 6-9pm reception at the Museum, and the exhibit continues through September 4 during normal Museum hours, Tuesdays through Sundays. Look to the Piet Schreuders/ Kenneth Fulton volume The Paperback Art of James Avati for the definitive study of the artist’s best-remembered work (with a panorama of paintings and photos viewable here) — and check out some illuminating interviews here and here.