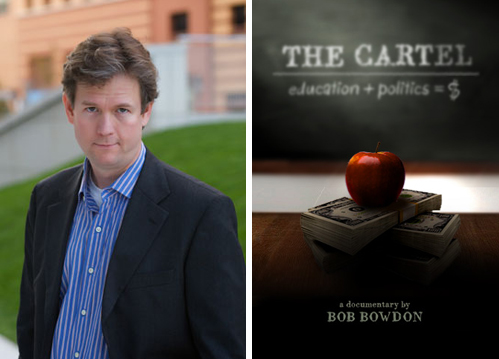 Veteran broadcaster and first-time filmmaker Bob Bowdon comes to Red Bank Tuesday night for a special pre-release screening of THE CARTEL, his highly charged “blogumentary” on the state of public education in New Jersey.

Here in New Jersey, there’s probably no bigger “hot-button” issue than public education and its discontents (unions vs. politicians; public servant salaries; school choice, and the “T” word) — and there’s likely never been anything so poised to push that button than The Cartel.

Just days away from general release in a handful of major markets, the documentary feature by anchorman-producer (and sometime actor) Bob Bowdon comes to Red Bank tomorrow night at the tail end of a week that couldn’t have been scheduled any better by the savviest movie publicist — from last Tuesday’s historic voter rejection of municipal school budgets, to the ongoing investigation that brought the FBI to the doorstep of the region’s biggest education superstar.

Tuesday’s screening event at Clearview Red Bank Art Cinemas (an event for which the filmmaker is scheduled to be present for a Q&A with the audience) is just one whistle-stop in a weeklong homecoming preview junket that culminates with an Education Reform Rally on Thursday evening in Trenton — and kicks off this morning with an 8:40a appearance by Bowdon on MSNBC’s Morning Joe program.

THE CARTEL director Bob Bowdon, as you might remember him from his stint as a correspondent for Bloomberg TV — and as fake-news anchor “Brian Scott” in a series of satirical web reports for The Onion News Network.

It’s all in the media mix for the Hudson County resident, whose background includes stints as a producer for Jackie Mason’s old talk show (and other items in what’s seen in retrospect as a golden age of original programming at WOR TV) — as well as an on-air anchor and/or correspondent for various regional cable systems and the widely seen Bloomberg Television. The first-time filmmaker is also not shy about mentioning his occasional and ongoing work as “Brian Scott,” earnestly stalwart reporter of fake news for the comic dispatches produced by satirical weekly The Onion (an example of his work can be seen here).

Reached by phone in the middle of a whirlwind weekend that’s taken him from Houston back home to Hoboken, Bowdon allows that his maiden moviemaking venture is “certainly an opinion piece, as you can tell by the title. I’m not pretending I didn’t have a point of view.”

That viewpoint — as expressed in a series of interviews and on-the-street sequences shot in locations throughout New Jersey — is that the apple of public education, as cultivated in the Garden State, is a wormy thing, in which the traditional solution is “to throw money at a problem,” and where “a clear demand for charter schools and greater choice” has been thwarted by a powerful teachers union, a “ridiculous” tenure system and an establishment that “wants to prevent their growth, under the guise of helping kids.”

It’s a theme that’s understandably provoked a robust rebuttal from education professionals, while being embraced by such media outlets as National Review, The New York Post, Lou Dobbs, Gannett gadfly Bob Ingle (who appears on camera in the film) — and  Jersey 101.5, who will offer a simulcast of the rally in Trenton on Thursday evening.

“You could say that The Cartel is more like the Op-Ed page than the news page,” Bowdon says of the release, which is being distributed in major markets by the Moving Picture Institute (An Inconvenient Tax;Free Market Cure). “But I have a lot of facts and data supporting me.”

What you couldn’t say, according to the filmmaker, is that his work falls squarely within the usual partisan lines — as Bowdon emphasizes that “we go out of our way to show Democrats for school choice. We’ve got such right wing radicals as Bill Maher agreeing with us.”

And, while observing that “in some ways you could call it a blog,” the filmmaker asserts that The Cartel is “not like a narrative film,” in that he didn’t commence filming with an eye toward conforming to a predetermined story arc.

“I thought of topics in terms of chapters — I did chapters on charters, on corruption, on tenure, on distance learning and how the teachers union killed it,” Bowdon says. “But I didn’t know what the crescendo to the piece would be until I was well into the production.”

That crescendo largely peaks around the topic of choice — an issue that Bowdon (who’s not a parent himself) frames as the fight against “forcing parents to send their kids to any one type of school,” rather than “a strict philosophy of being either for or against public education.”

It’s a motif that jibes with the ideas long put forth by the state’s recently appointed Education Commissioner (and former gubernatorial candidate) Bret Schundler, who Bowdon calls “one of the most articulate speakers on the topic in the United States.”

As for the question of whether Bowdon feels at all vindicated in his views by the recent statewide results — and whether he feels that his work has had some impact at the ballot box — the director responds that “Governor Christie has shone a light on the problems that we face, and I’m delighted to see this kind of scrutiny.”

“Public awareness is definitely increasing on these issues,” Bowdon adds. “We’ve played our part in that — but there’s still so much left to do.”

Admission to Tuesday’s 7:30p screening of The Cartel (and “town hall” discussion with the filmmaker) at Clearview is $15, available online here. Ticket proceeds will be dedicated to the film’s distribution, and “all ticket purchases are final — no refunds.”