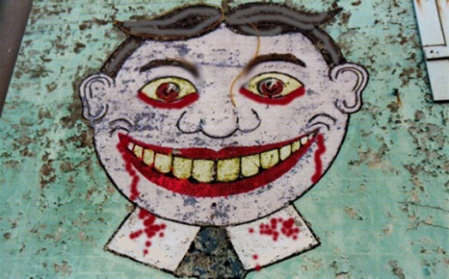 Tillie death do us party: The region’s biggest Zombie Walk event returns to the boards and boulevards of everyone’s favorite “city in ruins” this Saturday, augmented by zombie-themed movies, parties and even a special salute to the immortal King of Pop.

Who knew there could be so much life in the concept of zombies?

According to self-styled zombie king Jason Meehan, the modern phenomenon by which the streets of major cities are regularly taken over by mass gatherings of gamboling ghouls was conceived by one Thea Munster of Toronto. As legend has it, the horror movie connoisseur planned the first organized zombie walk in the fall of 2003, and as it gained in popularity every year, copycat constitutionals sprang up across North America and several other countries.

About a year ago, Jason and his wife Christina were bemoaning, as married couples often do, the lack of zombie walks in New Jersey. Taking matters into their own hands, the Meehans rolled over and played dead —  with the idea of getting as many of their friends and family members to join them as they could.

What started off as something that Jason thought would only attract about 25 friends (and maybe his parents) quickly turned into a viral sensation — as the first Asbury Park Zombie Walk, held on October 4, 2008, summoned about 350 people from their would-be graves.

Flash forward a year later, and the event — now rebranded as the New Jersey Zombie Walk, in a nod to its near-epidemic growth — has taken on a half-life of its own. This Saturday, October 3, the streets of Asbury Park will come alive (so to speak) with the sound of moaning, as the zombies walk among us once more — accompanied by a Zombie Fest that promises such locally sponsored offerings as a zombie beauty pageant, a Jell-O brain eating contest, and a karaoke party.

Aspiring JerZombies are advised to head to one of the Shore’s most distinctively bizarre buildings — the Carousel House just off the south end of the Boardwalk — which will act as the base camp for the day. No pre-registration is required, but in order for the organizers to keep a “dead-count,” participants will need to get a wristband, which will also entitle them to a host of exclusive discounts and freebies from local businesses. Late arrivals can get a wristband at any time during the Zombie Fest, at Paranormal Books & Curiosities on Cookman Avenue. The festivities begin at 11am, and the start time of the walk start time is slated for 5pm.

The day’s proceedings begin with presentations on makeup effects and prosthetics by AnatomyFX and a professional makeup panel. There will be stations equipped with makeup that attendees can utilize free of charge. Those who prefer a more professional funeral-worthy pallor can take advantage of the skills of one of the expert makeup artists, who will perform a macabre makeover for a $10 donation.

Award-winning zombie fiction author Brian Keene will be on hand to speak to the throngs of undead, and at 8pm the Jersey Shore Roller Girls will host a zombie-themed evening of roller derby, highlighted by a live-undead recreation of Michael Jackson’s “Thriller” video, performed by volunteers trained at Asbury Park Dance and Yoga Studio (the performance will be reprised on Halloween night at thePyramid Prductions party The Shining: Red Rum Red Rum). There’s also a special screening of the zero-budget horror hit Colin at The ShowRoom, and a Zombie AfterParty at Asbury Lanes that stars, among others, Johnny B. Morbid and The Dead Elvi.

Red Bank oRBit caught Jason Meehan between daylight gigs as a professional photographer, to find out what unsuspecting citizens have in store for them when the Living Dead lurch anew on the streets of Asbury Park.

RED BANK ORBIT: One must ask…why did you decide to devote yourself to this cause for animated corpses?

JASON MEEHAN: Mostly out of jealousy. A couple years ago, a friend of ours who lived in Atlanta, went to a zombie walk there and sent us a bunch of pictures and told us how much fun it was. We were insanely jealous. We scoured Google trying to find one in Jersey and thought there’s gotta be at least one, since Jersey’s a lot crazier than Georgia. We couldn’t find any! The only one we found was on TCNJ’s campus and it was for a club. The closest ones after that were Philadelphia and Cincinnati.

Why Asbury Park? Why are you unleashing the undead on unsuspecting Jersey shore residents?

We moved to Asbury Park almost two years ago, and right away thought the city was the perfect setting. There are a lot of buildings that are well kept and being revived, but then there are also a lot that are decaying and in disrepair like the Charms Building. It’s almost apocalyptic-looking, because it’s structurally unsound and roped off. We thought it was perfect for a zombie walk and there weren’t any others going on in Jersey, so we just started it up ourselves.

So how did you get started — what was the first lurching step you took?

October 4, 2008 was the first one. We set up a Myspace page and it all happened in like eight hours on September 1st. We just set up a quick page, designed stickers…and no pun intended, but the viral marketing of Myspace really got us a lot of attention. We thought we were going to have maybe 25 of our friends and our parents show up for the first one, and 400 people came. We really weren’t expecting that. Now, it’s always the challenge of how do we make it more fun than the last one.

Are you sticking with the word-of-mouth marketing plan?

We have a street team-based marketing plan. We’ll put up postcards, hand out flyers. We have a great street team that is always going out and displaying our signage. We’re going to have teams handing out information on Friday at movie theaters for the premiere of Zombieland. We figure anyone who is going to seeZombieland should be at the Zombie Walk.

How many participants are you expecting to rise for the occasion?

We broke the October 2008 record at the walk we held in May. Nobody wanted to wait. We got so many e-mails from people saying that we had to have another one sooner, so we had one in the spring to promote the one this October. We had 500 people show up six months before Halloween, when no one is in the Halloween spirit…they still came out in record numbers. We’re going after the east coast record for zombie walks if we can get it — we’re hoping for 1000 zombies this Saturday.

Given how notoriously disorganized most zombies are, how do you keep the body count?

We’ll have a sign up table at the Carousel, our base camp for the day. You’ll get a wristband with a number on it. Once a zombie has a wristband they are also entitled to 25 different discounts from participating businesses in Asbury Park. We have a whole lineup of events scheduled with artists and vendors, starting at 11am.

This seems like such a huge undertaking — no pun intended. How do you manage to not charge participants?

The Zombie Walk is 100% free. My wife and I want it to remain what we started out to make it…a really fun, cheap way to kick off the Halloween season. We work really hard to maintain that now that the event is getting bigger.

We raise money from sale of T-shirts, stickers and posters. You can do your own makeup or we’ll have a table with a lot of the basic essentials, so even if you can’t afford to buy makeup you can get something done. We’ll also have about 25 professional makeup artists who will be doing makeovers for just $10. That money goes right to the artist just to pay for the cost of their makeup, because they use the real movie cream makeup.

How did city officials react when you first rounded up a bunch of corpses to stagger through Asbury’s streets?

The town is really supportive and welcoming. Last time we thought it was going to be really small, so we didn’t get the city involved until the very last minute. Then I started to get worried that we were going to have a lot of people so I figured I should tell the law enforcement and urban enterprise zone.  When I called, they had already known about it and said, “Yeah we can’t wait! It’s going to be awesome!”

This time we have been coordinating quite a bit with the city and the Chamber of Commerce. Asbury always has First Night the first Saturday of the month, where local businesses and restaurants are open late and there is live music. This month it coincides with Zombie Walk. They actually let us run the lineup of events for First Night. We are going to collaborate, so there is going to be a stage in the plaza and there will be a bunch of contests that we are organizing and local businesses are sponsoring. We’re going to have a costume talent show contest, like a zombie beauty pageant and a brain-eating contest with yellow Jell-O brains.

You and Christine seem to be friends with everyone in Asbury Park. We hear that you are also working with The Showroom.

We’ve been doing another series of events with The ShowRoom leading up to the Zombie Walk to promote the event, but also to help endorse the movie theater. We partnered with them and had the idea to show classic horror movies every Friday night until Halloween. When we were putting together the list, I said they should try to get Colin, which came out last year in Britain with a budget of about $70. It is a zombie movie and at Cannes it received rave reviews for being innovative and making the main character, a zombie, be sympathetic. We found out that it’s the North American premiere of the movie. The director sent a video clip to The ShowRoom, so everyone who sees the movie will get a message from the director thanking them for being there and telling a little bit about what went into making the movie. During the Zombie Walk however, any zombies that want to buy tickets for the next couple movies being shown there can get ‘buy one, get one free’ tickets.

Zombie fever seems to have struck the Jersey Shore Roller Girls as well.

What is the allure of zombies?

We get asked that question a lot. I don’t really know what the phenomenon is, but for us it’s that they are very human characters in horror movies. Usually the bad guy has super-natural powers, is a psychopath, and has a long history of mental illness or schizophrenia. Zombies are just people like you and me. They left for work one morning, and didn’t anticipate becoming a creature that ate humans and brains. Now they’re the bad guys, but they weren’t expecting to be. They’re the underdogs of the horror world. You almost sympathize with them. The Zombie Walk is just a chance for everyone to feel like they’re part of a horror movie.