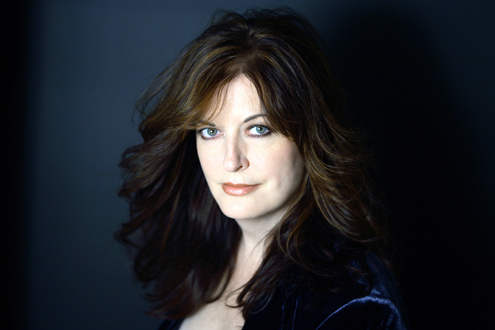 She’s been called an “American vocal treasure,” and one of “The 12 Jazz Divas You Need to Know.” An almost best-kept secret who’s been invited to perform before presidents (Bill Clinton, Mikhail Gorbachev) and pop royalty — as when Barbra Streisand commissioned her to write an original song for her wedding.

Her credits include a Tony nomination for the Broadway hit Swing!, appearances out in front of some of the top musical organizations in the land (Wynton Marsalis and the Jazz at Lincoln Center Orchestra, Keith Lockhart and the Boston Pops andPeter Nero and the Philly Pops) — as well as writing and singing the familiar theme song to the TV sitcom The Nanny.

Want more? She’s appeared in major moving pictures, has released several acclaimed albums, and has co-written songs with collaborators that range from the iconic Carole King to gospel artist Barbara Carroll to the late great Cole Porter (wait, what?).

To quote one smart-aleck in the local media, “If Ann Hampton Callaway still isn’t a household name to most Americans, it could just be that we’re going to need a bigger household — the better to contain the talents of this multitasking singer, pianist, composer, lyricist, arranger, actress, educator, TV host and producer.”

A native of Chicago (where her recently deceased father John Callaway was a TV broadcast institution),  the self-described American Diva has performed all over the world — although she’s only now getting around to doing a gig on the Jersey Shore for the first time, with a gig this Thursday at  Tim McLoone’s Supper Club, the sophisticated space-age space that recently hosted a performance by her sister, Broadway star Liz Callaway (with whom Ann toured in an act called Sibling Revelry).

Ann Hampton Callaway in action is a study in cool and confident control, with an easy elegance complementing the thrilling dramatic arc of her versatile voice — an instrument that can make a classic piano ballad out of the breathy Stevie Nicks folker “Landslide,” and stake a new and authoritative claim to the Etta James signature “At Last.” Red Bank oRBit found this keeper of the key to the Great American Songbook somewhere, as they say, beyond the sea…

RED BANK ORBIT: So where in the world is Ann Hampton Callaway?

ANN HAMPTON CALLAWAY: I’m on a bus, going from Barcelona to Toulouse, where I’ll be performing next. Actually, we’re in the middle of a huge traffic jam!

Have you appeared in Spain previously? Do you have a big fanbase there?

I have sung in Spain about eight times. The music that I do is just so well received by people who don’t necessarily speak English — people in Europe have more of a listening tradition; there’s almost a sense of awe regarding the music that I do. I’m a sort of ambassador for the Great American Songbook.

And from the grand cities of Europe you trek to Asbury Park, where Bob Egan’s got you booked into a former Howard Johnson’s shaped like a flying saucer. Actually, it’s an amazing place, and I’m sure you heard good things about it from your sister when she performed there.

Bob’s a dear friend of mine. I’ve sung in his clubs around the region. And I’ve never performed at the Jersey Shore — I’m a huge fan of the ocean, and I’m looking forward to seeing it.

I think before we go any further we must address the story of how you came to collaborate with Cole Porter, who by my calculations, passed away when you were, what, six?

A friend of mine found two lyrics by Porter that were never set to music, in a book of his song lyrics.  One was “It Never Entered My Head,” which was not as pretty as “It Never Entered My Mind” — but the other was a piece called “I Gaze In Your Eyes,” which was just a beautiful lyric. I understand that it was written with a young British soldier in mind; Cole Porter had fallen in love with him, and in fact when it was performed on the BBC, a listener called in, and this person had the original letter that Porter wrote the lyric on. I wasn’t sure if we’d ever be able to release the song becuase it wasn’t published, but I went ahead and recorded it anyway in a session with Ben Bagley producing, and we submitted it to the Porter estate. I heard later that (Porter estate trustee) Robert Montgomery cried when he heard the tape.

When it comes to the Great American Songbook — which is a phrase we hear all the time, even if it doesn’t exist in any definitive form — do you view it in the way that a legal scholar might approach constitutional law, as someone who favors a strict interpretation? Or would you open up the canon to include some more contemporary composers?

It’s an ever growing thing, in my opinion. The bulk, the core of it, is this body of songs that were written for dramatic texts, that sort of set the rules for everything to follow. As a songwriter I try to aspire to the craft of 1930s and 1940s music, although I don’t think I self-consciously try to sound like those songs. I’ve written some big-band, rompy, novelty numbers, and I’ve been complimented that songs of mine were very Bergmanesque — Marilyn and Alan Bergman are just two of the greatest songwriters — and I wrote the Streisand wedding song “I’ve Dreamed Of You” with that tradition in mind.

As far as what I consider worthy of inclusion, I’ve widened my net to include the memorable, beautifully crafted songs of contemporary composers. In fact, I’ll be doing a show at Merkin Hall featuring the songs of  Joni Mitchell, Carole King andCarly Simon.

King and Mitchell, who’s gotten quite cynical in her later material, were the songwriters who most inspired me as a kid. Tapestry was definitely a big influence — I remember playing it on my Sears record player — and I got to tell Carole King personally how much it meant to me.

Susan Werner is another one of the more inspirational songwriters of our time. Shelby Lynne is just a wonderful writer of country songs — and people like Sting, Stevie Wonder, so many great writers are alive and working today.

You’ve worked with some interesting record producers as well, in a number of different styles. Who are some of your favorites?

Elaine Martone, who I worked on with my last two albums. She’s got an intuitive sense of what makes things work. Danny Weis, who did Flow and After Hours — and Robert De Niro! He directed me in The Good Shepherd; I sang a song for that film and he literally did 50 takes of that song on the soundtrack, trying something different on each line. It was a thrilling experience to work with him; he’s got such a fantastic, dramatic mind.

Do you like to work the old-school, Sinatra way, with all of the musicians doing a live-in-studio take, or are you more a child of your times, using the available studio technology as an instrument unto itself?

Liz Callaway, the original cast member of CATS who performed at McLoone’s Supper Club in July, seen here with sis Ann Hampton Callaway in their duet show SIBLING REVELRY.
I like to do as live of a feel for every recording. I like to say that I do my best thinking when I’m not thinking!Well, De Niro’s just one of a pretty mind-boggling set of characters in your life. Who among them has been a particular thrill for you to have met or work with? It was a thrill to sing for Gorbachev. I sent him a song that I wrote for Barbra Streisand; in fact he published it in a book of letters that he received from Americans — when I performed it for him during the summit he had with Reagan, I watched tears roll down his cheeks. There’s just no more powerful tool to bring people together.

Just seeing footage of you onstage, you’ve just got such a cool, collected way about you, it’s not readily discernible if you’re at all nervous about performing for heads of state or famous celebrities. Has anyone ever really intimidated you; thrown you off balance?

The only person I’ve ever been intimidated by was Barbra Streisand! Just talking to her, meeting her — for everyone else, I can maintain some sense of dignity! But there were times when I just couldn’t believe I was talking to her, 12:30 at night, in the car after a performance of Swing, and she’s talking to people in the background while she’s talking to me — (lapses into a killer impression of Streisand) ‘No, no, where’s that other swatch…I think we’re gonna go with that other color here…’

Your dad must have taught you a thing or two about keeping things under control in the company of the powerful and famous.

He was just the most researched, prepared interviewer ever. He went to the table ready.

This is my first concert tour since he passed away, and you know it was just such a shock, just one of the biggest losses of my life. There were a couple of times when my dad and I performed at galas together, for the PBS station that he was with for years; also times when he and I performed with my sister, and once with Christine Ebersole. People got a big kick out of seeing the serious journalist belting out a song onstage.

Well, you and your sister obviously get the vocal talent from your mom (singer Shirley Callaway), but what kind of things did you take from your father, as a journalist and broadcaster, that have helped you navigate your way through your artistic pursuits?

He had such a sense of curiosity. He taught me to keep my eyes open, listen, be in the moment and you’ll learn new things all the time. I carry his spirit with me always.