Originally published in the Asbury Park Press on July 20, 2007 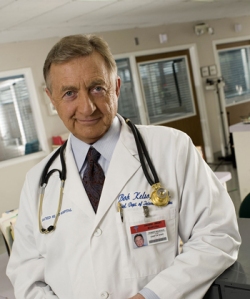 All in all, it’s a great time to be Ken Jenkins. With more than a half century of dedicated endeavor in all aspects of his craft, the veteran actor-producer-director has become something of a teen idol, thanks to his co-starring role as Dr. Bob Kelso in the NBC comedy “Scrubs.” The quirky, hospital-set ensemble show is followed by a fervent fanbase that Jenkins figures to center around “medical students, surgeons — and 13 to 15 year olds.”

“Teenagers run up and introduce themselves, sticking out their hand, all very proper,” the 66-year old star says with a laugh. “At my age, for kids to think I’m cool is really something.”

While the self-described “old character man” has nothing but praise for the series that first aired in 2001 — observing that “the acting and the writing have grown better and better” — the boards of the legitimate stage have remained his primary beat. It’s an ongoing passion that brings Jenkins to the Jersey Shore this weekend as director of “Bookends,” a new musical play now in its world premiere engagement at New Jersey Repertory Company in Long Branch.

Married since 1970, Jenkins and Houghton were first teamed in the roles of “loving adversaries” Kate and Petruchio in “The Taming of the Shrew,” and went on to play everything from brother and sister (in “The Glass Menagerie”) to father and daughter (in “Major Barbara”). With the formation of their own Pilgrim Repertory Company, the couple brought classical theater and “ragtag bits of Shakespeare” to remote rural communities, facilities for the hearing-impaired, and other places that were as far off-Broadway as could be imagined.

“Some kids in rural Kentucky had a better innate understanding of Shakespeare than we did,” recalls Jenkins of his days in what Houghton calls “arts missionary work.” “If you listened, you could hear leftover bits of Elizabethan accents in the way they spoke.”

Best known for her role in the provocative, Academy Award-winning film “Guess Who’s Coming to Dinner?” — a classic in which she starred alongside Spencer Tracy, Sidney Poitier and her aunt Katharine Hepburn — Houghton is an acclaimed author whose portfolio boasts an eclectic olio of short playlets, full-length works (the playwright presented a reading of her “Best Kept Secret” at NJ Rep several seasons back), translations and even one-woman presentations on cultural and literary topics.

It was while doing research for a piece on Louisa May Alcott that Houghton was introduced to a pair of antiquarian book dealers named Madeleine “Mady” Stern and Leona Rostenberg. Friends since childhood, the two women defied the conventional expectations of their old-world German-Jewish families to become highly educated experts on a variety of subjects; traveling the world and building a successful business in an ultra-specialized field. Drawn to Mady and Leona’s warmth, energy and passion for life, Houghton befriended the pair as they entered their tenth decades — and somewhere, somehow, the concept for a musical was born.

“What those two did just makes your jaw drop,” says Jenkins of the play’s protagonists, whom he had the privilege of knowing personally. “I’m in awe of what they accomplished as women in a man’s world.”

While the subject matter might seem an oddball choice for a musical, Jenkins sees their shared saga as a very uplifting, human story of triumph; set against the changing cultural landscape of a tumultuous and eventful century.

“They were the most intellectually active people each other had ever known,” the director says of Mady and Leona (who has since passed away). “Their lives were like a string of jewels…they’re like Shakespearean characters.”

Portraying Mady and Leona as adults are a couple of NJ Rep company regulars, Susan G. Bob and Kathleen Goldpaugh. Also on hand in the large ensemble is one of the youngest members of the stock company, Jenny Vallancourt, who excelled in last year’s “October 1962” and appears here as Mady in flashbacks. Dianne Adams and James McDowell (“The Wind in the Willows”) composed the music and lyrics in collaboration with Houghton, with Adams serving as musical director and Jennifer Paulson Lee handling the choreography.

Director Jenkins, for his part, seems ecstatic to be spending his series hiatus on this obvious labor of love, enthusing that audiences “will be proud of their humanity when they see this show…you’ll laugh, cry, go home and talk about it and decide that being human is a good thing after all.”

“They’re doing new plays with love and dedication in Long Branch,” Jenkins says in reference to his producers Gabe and SuzAnne Barabas. “It’s wonderful to be able to do something without network guys breathing down your neck!”